It's June 24th and for years this

was "National Handshake Day," not

to be confused with "World Handshake

Day" which is traditionally observed on

were cancelled last year because of the

pandemic.  About the last thing anybody

wanted last year was to be holding somebody

eles's hand! Even now as the pandemic begins

to ease and many masks are coming off the

waving greetings to the opposing team at the

end of a game. Some men prefer the "fist " or

"elbow bump" as a hello to friends. You know

the handshake dates back to the middle ages

when one knight would approach another and

hold out an empty hand to show he held no

weapon.  There was always someting great about

a good firm handshake with another person. Now

that so many people have had the vaccine against

covid I, for one, would like to see the handshake

return. It's just seems more civilized than an elbow

bump to me! Hope you're well and that all your

Posted by David DeCosmo at 11:05 PM No comments:

A FLOOD OF MEMORIES!

Every year around this time I get requests for
interviews. But unlike the days when I was an
active reporter doing the interviews.....these are
requests from people who want to interview me!
And I know just what they'll be asking about.
It's the 1972 Tropical Storm Agnes Flood!
Back in '72 I was the News Director of WILK
Radio.
Things looked bad in June 22nd so I called
my wife to tell her I'd be home late. Turns
out I didn't see her for nearly three days!
When the waters of the Susquehanna River
began to rise rapidly because of the "Agnes"
storm I went to the Luzerne County to call
updates back to my station.
But Civil Defense, the agency that
preceded the Emergency Management
Agency, didn't have a Public Information
Officer. So, when I walked in, I got drafted!
I didn't make the decisions for Civil Defense.
But, most of the time, I was the one who
announced them.
The one I'm often remembered for was the
one I made on June 23rd as the sirens sounded
and I told area residents it was time to....
"Get out. Get out now!"
A little while later I was sending a report
on our two way radio in the sub basement of
the Courthouse when water started coming
into the room from a drain in the floor.
I always thought water was suppose to go
out drains!
So when the water came in.....I got out!
Eventually all of us on the Civil Defense
staff had to evacuate the Courthouse and move
to higher ground.
We ended up in the Wilkes-Barre School
Administration building sending hourly
news updates to 13 area radio stations. I
formed and directed that network.
Initially we used an Army Field Telephone
which was wired, literally, through the streets
to the old WYZZ FM.  The other 12 stations
re-broadcast our reports at 15 minutes past
each hour and throughout the emergency
we only missed one report.
That's because a couple of kids found our
wire and decided it would make a good
jump rope!
It's been 49 years since "Agnes" paid
her visit and I suspect I'll be telling a few
more stories about those days.
A lot has changed in those 49 years
including, as my photo will illustrate,
me!
Hope you're high and dry and that all
your NEWS is good! 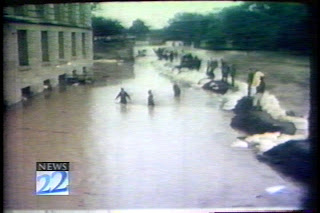 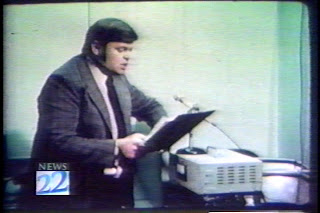 Posted by David DeCosmo at 10:53 PM No comments:

THE HOLE IN THE STORY!

THE HOLE IN THE STORY!

It's June 22nd everybody when we

celebrate the invention of the dounut.

At least the dounut as we know it now.

to this country to New Amsterdam which,

of course, is now New York! But it wasn't

the "modern day dounut." He was tired

of the greasy donuts he and his fellow

crew members were given to eat and with

the wasted center of the baked cakes. He

took the ship's Tin pepper and cut a circle

in the center of a wad of dough and baked.

or fried. a dounut! He passed the idea along

to his mother who continued to make

donuts that way and the idea caught on!

You can celebrate by having a dounut today.

And don't worry about putting on weight.

Remember, the center of every dounut is

and that all your NEWS is good!

Posted by David DeCosmo at 11:07 PM No comments:

It's usually a good think to leave your

mark in the world as you live your life.

But that's not always the case. And an

interesting example. That's the date that

10 coal miners, members of the secret

organization the Molly Mcguires, were

hanged for crimes ranging from bombings

to murder! The "Mollies" committed acts

of sabatoge against mine operations in an

effort to force mine owners to improve working

conditions. One of the men convicted of

an Iris immigrant who owned and operated a

tavern. Campbell was hanged at the Carbon

Thorpe. Before he went po the gallows to

slammed his muddy hand onto the wall of

his cell and proclaimed the mark left behind

woud stay there forever as proof  of his

innocence! That old prison is a tourist

attraction these days and most visitors want

to see the cell where Campbell was held.

And, yes, the mark is still there!!! Hope

you'll get to see it some time and that that

all your NEWS is good! 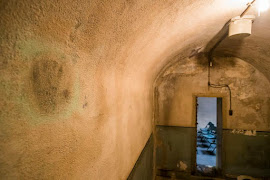 Posted by David DeCosmo at 10:59 PM No comments:

Talk about a great day to celebrate! This

to celebrate the Dad's that are with us and

remember those now gone. It's also the

start of Summer. And who wouldn't

want to celebrate that? But wait! There's

I'd suggest there's a way to mark them all.

Appreciate the start of summer by taking

your Dad out to a turkey dinner, topped off

with an Ice Cream Soda! Hope you enjoy

all of these special days in one and that all

your NEWS is good!

Posted by David DeCosmo at 11:10 PM No comments:

I'm not at all found of the designation for

this particular holiday but, that said, June 19th

does mark an important event. The end of

slavery in the United States. In reality it

was suppose to have ended, by law, on January

first of 1883. That's where the emancipation

was to go into effect. Nut, of course, the

Civil War was still ragging at that time and

slave holders were not about to observe

a law passed by the Union. On June 19th

of 1885, however, word of the proclamation

of the south in Galveston, Texas and the word

went out this was a legal directive across the

nation! Now, as of this year, Juneteeth has

concerned about that as my mail is already

running late and another postal day off

won't help! I would hope someone in

authority could come ou with a better

name for the observance and, while they're

at it, why not move it to a Monday permanent;y

so there's another long weekend to look forward

to?! Hope you're well, free as a bird, and that

all your NEWS is good!

Posted by David DeCosmo at 11:33 PM No comments:

and those who haven't started already are

likely planning their summer vacation. For

many in our area that will include a trip to

the Jersey shore. Our familty goes every

year. But one of the attractions that use to

lure us to the shore is, essentially, gone now.

the first pier at theJersey shore. But it was

mile out to sea. The original Steel Pier was

It had three movie theaters, a giant ballroom, kids

ballroom. There was a diving bell to take visitors

to the bottom of the sea beneath the pier and, of

course, the famous Diving Horses. One of the

riders was Della Fox, the mother of the Gennetti

hotel owners in our area. The pier started to

decline in the late 60's and severe damage from

a storm pretty much finished it off. There's still

a "Steel Pier" there. But it's a very small pier

though of old times at the Steel Pier. Hope

you'll make wonderful memories during your

vacation, where ever it may be, and that all

your NEWS is good!

Posted by David DeCosmo at 11:07 PM No comments:

David DeCosmo
Professional Broadcaster (radio & TV) for over 50 years. Hosted tours to vacation spots in the U.S., Canada, and Switzerland.